MAKING A GOOD SPEECH TO THE JURY (OR TO ANY AUDIENCE)

In his inaugural day Washington Post article entitled “Obama’s way with words,” Henry Allen states that “Obama is an orator, a rare thing in a time when educated people — a lot of them Obama supporters — have been taught to distrust old-fashioned eloquence.” Rare perhaps in most walks of life, but orators are still prevalent and valued in the courtroom. Opening statement and closing argument are, at their essence, public speeches designed to connect with the jury or judge in a bench trial and to persuade. 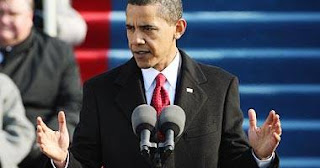 The Washington Post article does a nice job of reviewing the elements of good rhetoric and uses Obama’s prior speeches to illustrate his mastery. For instance, the article states:

"Connect with repetition, cadences, attitude, rises and falls of tone. Yes, we can. Obama's speech on Super Tuesday: "We are the ones we've been waiting for. We are the change that we seek.

"WE are the ONES we've been WAITing for.
It's ancient English metrics: WE are the CHANGE that we SEEK, a chant of dactyls, DA-da-da, DA-da-da, as in Longfellow's "THIS is the FORest primEVal."

Writing an opening or closing – a speech - with an ear for repetition and cadence is excellent advice for the trial lawyer.

The Post article was written in anticipation of Obama’s address. Did the new President live up to the expectations of him as a public speaker in his address? Let’s consider elements of effective oratory. While his inaugural didn't have the cadence that he is known for, it did satisfy many of the other elements of an excellent speech.

While a trial lawyer may never be able to master a delivery style and cadence of the President, the advocate can follow his lead and concentrate on selecting the right words to express an idea or describe the facts. Care can be taken to select words with the right connotations. These are a couple well crafted sentences from the address:

"As for our common defense, we reject as false the choice between our safety and our ideals."

"For we know that our patchwork heritage is a strength, not a weakness."
Rule of Three

The rule of three is a rule of repetition and cadence. It is extremely effective in driving home a point. It’s as old as “venti, vidi, vici” - “I came, I saw, I conquered.” Note how the Rule of Three works in this portion of the address.

"Today I say to you that the challenges we face are real.
They are serious and they are many.
They will not be met easily or in a short span of time.

But know this, America — they will be met."

Analogies can provide a convincing and concrete form of inductive reasoning. This is particularly true if the analogy is common to the audience and has a human element. President Obama told the human story of American revolutionaries and their struggle and related it to the capital.

"So let us mark this day with remembrance, of who we are and how far we have traveled. In the year of America's birth, in the coldest of months, a small band of patriots huddled by dying campfires on the shores of an icy river. The capital was abandoned. The enemy was advancing. The snow was stained with blood. At a moment when the outcome of our revolution was most in doubt, the father of our nation ordered these words be read to the people:

"'Let it be told to the future world ... that in the depth of winter, when nothing but hope and virtue could survive...that the city and the country, alarmed at one common danger, came forth to meet (it).'"

Then, President Obama used that struggle and Washington’s words to support his argument that America can overcome the challenges of today.

"America, in the face of our common dangers, in this winter of our hardship, let us remember these timeless words. With hope and virtue, let us brave once more the icy currents, and endure what storms may come. Let it be said by our children's children that when we were tested we refused to let this journey end, that we did not turn back nor did we falter; and with eyes fixed on the horizon and God's grace upon us, we carried forth that great gift of freedom and delivered it safely to future generations."

The Post article discussed the importance of Aristotelian arguments, and how President Obama has used them:

"Obama has won souls mostly with pathos and ethos. He hasn't needed logos much because he's usually preaching to the choir, all those shining faces full of hope. In an ugly and dangerous moment in his campaign, however, he used logos to justify the complicated position he had taken on the incendiary racial remarks of his former minister, the Rev. Jeremiah Wright. It worked for him."

True to his prior artful use of ethos and pathos, the President captured the significance of the moment when he delivered this part of his address:

"This is the source of our confidence —the knowledge that God calls on us to shape an uncertain destiny.

"This is the meaning of our liberty and our creed — why men and women and children of every race and every faith can join in celebration across this magnificent mall, and why a man whose father less than sixty years ago might not have been served at a local restaurant can now stand before you to take a most sacred oath."

The Washington Post article provides a nice review of the essentials of good rhetoric and the President’s inaugural address gives us an example of how an orator can apply those essentials.
Posted by Ronald H. Clark at 3:14 PM