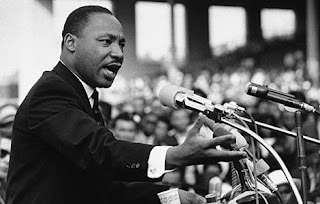 None of the students in my Trial Advocacy class were alive at the time of the march on Washington. None of them had watched the Martin Luther King’s “I Have a Dream” speech in its entirety. So, Tuesday’s class was an opportunity to not only commemorate the march and the speech but also let them learn from Reverend King’s example of how to be an advocate.

I asked the students to watch the full 17 minute speech for its content of course but to also focus on Reverend King’s advocacy skills. Listen to the types of arguments he makes. Listen for the rhetorical devises he uses. Listen to the modulation of his voice. Watch his nonverbal communication. Watch how his delivery changes when he is 12 minutes into his prepared speech and Mahalia Jackson says to him, “Tell ‘em about the dream, Martin.” He turns up from his text. He speaks from his mind and heart as a great communicator and national leader. When he speaks about his dream, his sincerity and integrity is evident.

My students learned how Reverend King resorted to the three Aristotelian arguments of Ethos, Logos, and Pathos. His logical (logos) argument was that African Americans had been given a promissory note – a promise of equality - “America has given the Negro people a bad check, a check which has come back marked ‘insufficient funds.’” He made an ethical (ethos) argument referencing Lincoln in his opening remark - “Five score years ago, a great American, in whose symbolic shadow we stand today, signed the emancipation proclamation.” And, he delivered an emotional (pathos) appeal - “I have a dream that my four little children will one day live in a nation where they will not be judged by the color of their skin but the content of their character.”

My students learned how Reverend King utilized speech devises to reach and convince his audience. He used the powerful bad check analogy to describe how the marchers had come to Washington to collect - “In a sense we have come to our nation's capital to cash a check.” This was not a time for gradualism. He applied the rhetorical device of the rule of three (tricolon) which gives power to a speech - "Free at last! free at last! thank God Almighty, we are free at last!" Most of all he had a memorable and meaningful theme – “I have a dream.”

These are some of the things my students and we all can learn. The full “I Have a Dream” speech can be seen here.