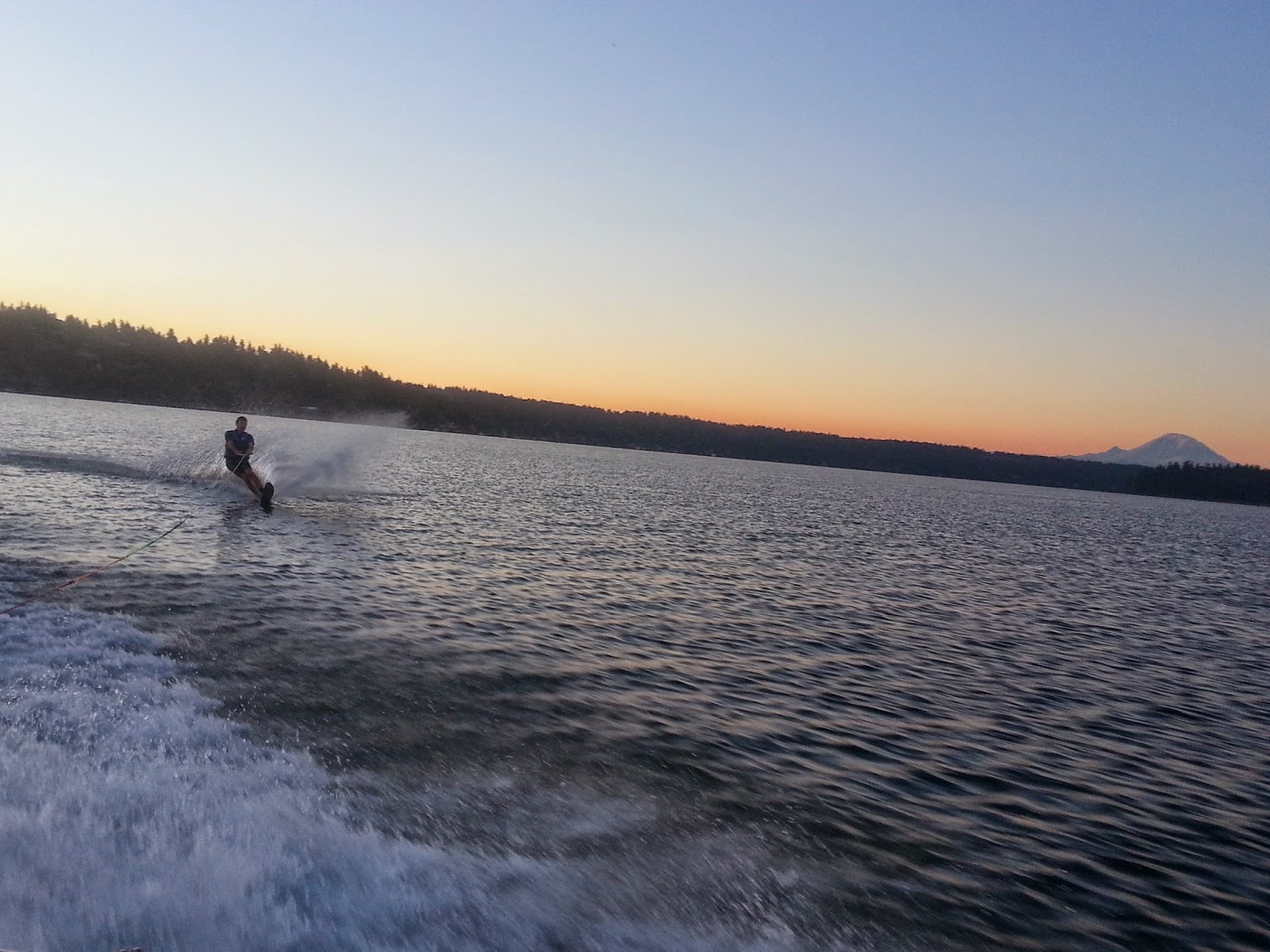 This month, the King County Bar Association Bar Bulletin published Charles Burdell’s  discussion of DON’TS  for mediations. Charlie Burdell had a career in private practice. He later became a King County Superior Court Judge before becoming a full time arbitrator and mediator. On the right, he is pictured waterskiing on Lake Washington last August. His helpful article on mediation mistakes to avoid reads as follows:
Thirty five years is a long time, but it seems like it was just yesterday.  I began doing mediations as part of the first “roster of volunteer attorneys” which was created in the early days of the Federal Bar Association.  I followed that with many judicial settlement conferences while I was a King County Superior Court Judge.  I left that work in 1990 to begin a career as a private mediator and arbitrator and am still going strong.  Last summer I successfully mediated the dispute between the taxi cab industry and ride service providers.

Mediation is a very important part of a successful legal career in litigation and the attorneys in this state are very good at it.  However, over the years, I have noticed several recurring mistakes.  Having seen lawyers make these mistakes for 35 years, I feel its ok for me to just tell it like it is and give you guys a list of DON’TS!!

Don’t oversell the client’s case to the client:  No case gets better than the first day it walks into your office.  Be sure to temper your early assessment of the value of your client’s case until you get an idea of the facts from the other side’s perspective.  Many times in mediation, especially of personal injury cases, the clients are frustrated when they are confronted with settlement which is far less than they were advised when their attorney was retained.

Don’t represent multiple plaintiffs in personal injury actions without providing “informed consent”:  RPC 1.8 (g) provides that a lawyer “who represents two or more clients shall not participate in making an aggregate settlement of the claims” unless each client gives informed consent in writing.  It is surprising how many lawyers come to mediation representing multiple clients injured in the same tort without any objective way to allocate a settlement and without obtaining the clients’ prior informed consent.  The best practice is to either obtain the clients’ informed consent prior to accepting the representation or just represent the client with the best case and refer the other injured party to your law school classmate!!

Don’t participate in mediation without all the stakeholders present:  Obviously, your client should be in attendance along with all decision makers.  However, don’t forget to at least inform lien holders of the mediation and invite their participation either in person or on the phone.

Don’t miss an opportunity to explain your case to the other side in a business like, professional manner.    If your mediator suggests an initial joint session, this is a golden opportunity for you to explain your case to the decision makers on the other side, without the filter of the opposing attorney.  You should direct your comments to the decision maker and in a calm, professional and business like fashion, thank them for participating in the mediation, tell them why you are right and why  they should agree with you.

Don’t participate in a mediation without providing the other side with a copy of your submission:    A copy of your submission will create a professional duty in your opponent to provide your version of the case to her client.  If you need to inform the mediator of something confidentially, send a second, private letter.  This is especially important for the defendant in a personal injury case.   Having your letter laying around the plaintiff’s home, gives family members a chance to understand there are two sides to the story.  Also, and most important from the standpoint of closing settlement, giving your submittal  to the plaintiff’s attorney, allows her to send it to the lien holders so they can understand the validity of the suggestion that they reduce their liens to enable settlement.

Don’t arrive at the mediation without an up-to-date summary of costs to be charged to your client’s recovery:   Uncertainty regarding the costs expended is a frequent mistake.  This is a very important calculation, because it directly affects the net recovery for a plaintiff in a personal injury case.

Don’t wait until midnight, when a settlement number has finally been  reached, to propose non-financial issues like confidentiality:   If confidentiality is important to your client, raise it in the materials you submit to the mediator and to the other side and make sure the mediator communicates it with your first offer.  Nothing derails an arduous negotiation more than raising new issues late in the discussion.

Don’t be a stick in the mud: Be open to creative solutions to reach settlement.  When Supreme Court Justice Bobbi Bridge began her legal career on the King County Superior Court, she observed a morning judicial settlement conference I conducted.   The parties were involved in a dissolution and the value of a diamond ring was in dispute.  The parties agreed on the cut, color and clarity of the diamond, but disagreed on the value.  Justice Bridge’s husband, John, was President of Ben Bridge Jewelers.  At my suggestion and with the concurrence of Justice Bridge, the parties agreed that we could call Mr. Bridge, give him the characteristics of the diamond and obtain his opinion as to its value.  We did, he gave us a value and the case settled!

Don’t come unprepared to any mediation, especially an early mediation:  Since most civil litigation settles, and since many settlements occur at mediation, it is extremely important to be well prepared and able to empower your mediator with the necessary information to convince the other side to agree with you.  Further, especially in early mediations, it may well be the first time your client sees you in action.   Early mediations are usually conducted before anyone has been deposed.  Remember, your mediator is only as powerful as you make her.  Be sure to have all the important facts marshalled and ready to assist the solution.  Also, don’t miss a settlement opportunity because an important witness has not been deposed.  Have the witness available by telephone and conduct a conference call to ask the witness on an informal basis what happened.

Don’t ask for or agree to non-disparagement clauses:  These clauses simply provide litigants who have just finalized a dispute with yet another cause of action.  Especially in business dissolutions, you can be sure the parties have disparaged each other for the entire life the lawsuit and probably before.  It is very easy for rumors of this conduct to be repeated after the settlement by third parties, which, when overheard by one of the parties, may cause another lawsuit.  The best advice to give your client who worries about being disparaged after settling the case is for the client to “consider the source”.