WHY LAWYERS CAN BE LOUSY COMMUNICATORS 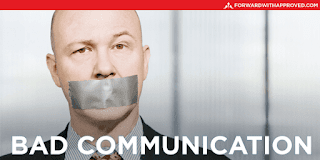 First, let’a examine how lawyers communicate in writing. Here’s how a lawyer wrote the sentence—“I give you an orange”:

I give you all and singular, my estate and interest, right, title, claim and advantage of and in that orange, with all its rind, skin, juice, pulp and pips, and all right and advantage therein, with full power to bite, cut, suck, and otherwise eat the same, or give the same away as fully and effectually as I the said A.B. am now entitled to bite, cut, suck, or otherwise eat the same orange, or give the same away, with or without its rind, skin, juice, pulp, and pips, anything hereinbefore, or hereinafter, or in any other deed, or deeds, instrument or instruments of what nature or kind soever, to the contrary in any wise, notwithstanding.

Actually, Englishman Arthur Symonds, in 1835, wrote this as a satiric piece spoofing how lawyers express themselves when they write.
Lawyers are professional communicators, who are paid to communicate with clients, opposing counsel, judges, juries and so on. However, lawyers can be lousy communicators. Here’s another example provided by Rudolf Flesch—legal definition of “ultimate consumer”:

Flesch points out that this should be translated into words that you would normally use in conversation, and “ultimate consumers” would be defined as follows: “Ultimate consumers are people who buy eggs to eat them.”[1]
Here are a few other examples of lousy writing contained in lawyers' pleadings and in and law student submissions:

Then, we lawyers write words that are never used except in legal writing:

The famous cowboy sage and comedian Will Rogers put it this way: “The minute you read something you can’t understand, you can be sure it was drawn up by a lawyer.”
So much for written communication, let’s turn to lawyer verbal communication. Here are some excerpts from  actual transcripts from trials around the country. Here are some questions[2]: (I didn’t make these up)

o Lawyer: "When he went, had you gone and had she, if she wanted to and were able, for the time being excluding all the restraints on her not to go, gone also, would he have brought you, meaning you and she, with him to the station?"

o Lawyer: "Now, you have investigated other murders, have you not, where there was a victim?"

How do lawyers become such poor communicators when they are paid to be the best communicators? There is a consensus of opinion on this.

“Law school is as much obscure vocabulary training as it is legal reasoning.  At its best, it can teach close thought and precise expression.  But too often law school is reverse Hogwarts – where Harry Potter trained to be a wizard – that secretly implants into its students the power to confuse other people instead of sowing the magic seeds of clarity and simplicity. . .”

Brian Garner, whom you know as Editor of Black’s Law dictionary and author of more than two dozen books about English usage and style as well as advocacy, wrote:

While lawyers are the most highly paid rhetoricians in the world, we’re among the most inept wielders of words. Stop and think about that. The blame goes primarily to law schools. They inundate students with poorly written, legalese-riddled opinions that read like over-the-top Marx Brothers parodies of stiffness and hyperformality.[3]

Turkowitz, in “How Not to Ask a Question”, wrote:

It isn’t really hard to abuse the English language. All you need to do is go to law school.