CLIENT AS A WITNESS: COURTROOM LESSON #3 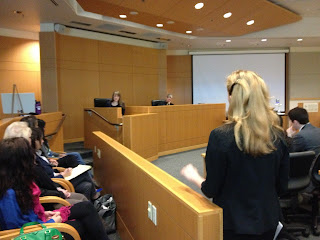 “Our client was a complete disaster!”

Sir John Mortimer’s fictitious Old Bailey barrister Horace Rumpole dreaded putting his client on the stand because somehow the client would manage to ruin the case. But, what about when the other side calls your supposedly thoroughly prepared client?

Students in my semester-long Comprehensive Trial Advocacy course go to court, watch a day of trial and write a report about what they saw and learned. The students select from federal, state or municipal court, and they can choose either a civil or criminal share their observations. The following are the student’s observations:

“Our firm represented the personal representative and sole beneficiary of the estate. The people challenging this testamentary devise were the decedents family, who were affirmatively and expressly disinherited in each of the decedents testamentary devises. The challengers challenged the will in most of the “standard” forms. They alleged undue influence and lack of testator capacity.

“After over a year of witness interviews, depositions, follow up interviews and general discovery, the firm that I was working for was of the position that the facts, and the law were fairly comfortably on our side. Not that anyone wants to go to trial, but I believed (perhaps in my youth and naivety) that we had a superior position to the other side, and that this trial might have been disposed of at a half time motion before the judge presiding over the bench trial.

“However, this peaceful stretch ended mid-way through the second day of a 4 day trial. The plaintiff decided to call our client as her last witness. We thought we had prepared him well regarding the type of questions he should have been expected to answer and how they might be asked. Our client was ready to go, but we did have some slight concern because past depositions had shown that our client could be “double talked” into making inconsistent answers. But with this in mind, we were prepared to cross in a way that would have rehabilitated our witness with relatively little damage being done.

“Our client was a complete disaster! He started getting shaken pretty easily early on in his questioning. His answers were inconsistent, and starting to go in directions that we had not expected them to go. He even answered a couple of questions in a manner completely outside of what we thought. Not only were his answers different than anything either attorney expected, but many of the “slam dunk” answers were met with “I don’t remembers” and “I’m not sures”. The attorney I worked for did a solid job rehabilitating our client, but by then the damage was done. He told me he was less surprised than I was about the bad direct of our client by the other party. Our case went from appearing to be firmly on our side to up in the air. And with the concern of our witness being put on cross by the plaintiffs’ attorney who had figured out how to cross his wires, we had to think long and hard about what to do when the plaintiff rested their case in chief following our client’s testimony.

“The case ended up being settled at half time. Although we were very nervous about what the judge was going to think about our client, who was really the most pivotal witness. The attorney I work for ultimately held that a half time settlement was proper, and our clients’ interests were still very well protected.

“This was a great lesson to learn early for a couple of reasons. First and foremost, I learned that although you can have a general idea of what people will say on the stand, you cannot ever really know what is going to happen when you are not the one asking the questions. I though this trial was disastrous (again, maybe in youth and nativity), but the lawyer I work for had been around the block, and did not appear to be shaken (or at least he did not show it).

“This was a very interesting a real world application of what we were talking about in class at the time. When I went and observed this trial, we were learning about case theories and telling the story. I did not think that the plaintiff was telling a good story, and that their theory was legal without any human element. In that regard, I thought we were “winning” in that we had spun a human interest tale about decade’s long friendship that ended with the loss of a best friend and companion. And everything was going well until the disastrous witness testimony.

“In conclusion, although the trial did not go the way I thought it might, being able to see two practicing attorneys going at it after over a year and a half of discussions, discovery and negotiations was very exciting. It did however strengthen my position that litigation might not be my strongest suit in the practice of law. But I can say, that this experience on top what I am learning in class gives me some hope for future courtroom situations.”