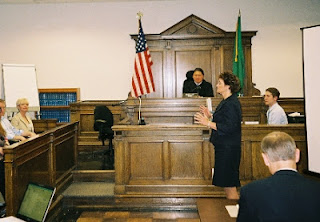 Students in my semester-long Comprehensive Trial Advocacy course go to court, watch a day of trial and write a report about what they saw and learned. The students select from federal, state or municipal court, and they can choose either a civil or criminal share their observations. This article is another in a series of the student’s reports. The names are changed to protect those concerned, but otherwise they are true accounts of the student’s experiences.

Here, the student attended a civil trial in which the plaintiff was injured when a bus drove over a portion of his leg. The following are excerpts from the student’s report:

“I found that if you know your evidence rules, you are well ahead of the game during the pre-trial conference. (Defense counsel) knew the rules and could intelligently speak to applicable case law. It was handy that she had copies of the cases that were on point and that she could tell the judge what the cases said. The plaintiff’s counsel, well, not quite as on top of it. Hearsay objections seemed to confuse the plaintiff’s counsel. At times defense counsel seemed a bit confused as well, but Judge Short was on top of his hearsay and knew what he was doing. What a difference a competent judge can make in a trial!

“Another key lesson from this portion is to make sure that you have copies of any documents, photos, diagrams, etc. that you want to have admitted! You need a copy, opposing counsel might want a copy and the judge needs a copy. MAKE COPIES!

“Observing voir dire was a fantastic experience! The two attorneys had very different approaches, and it was easy to see how the trial really begins at voir dire for a jury and how it is an important time to begin building your case theory and developing a positive rapport in the courtroom. . .

“It was great, having just done the voir dire exercise in class, to watch the two attorneys in action. It was clear that counsel for the plaintiff had not really thought through his “good juror/bad juror” profile – at least that is how it appeared. Plaintiff’s counsel seemed to ask questions intended to find those individuals who had ever previously worked for the state, county, or even metro. The judge had previously asked members of the jury pool to raise their hands if they had worked for metro or knew someone, but it did not appear that plaintiff’s counsel took very good notes and missed the opportunity to speak with all the people who had raised their hands. The attorney asked several questions about the standard of proof and whether the jury understand preponderance. He spoke about reasonable doubt and how that was not the standard here. This really seemed to confuse the jury. Overall, the plaintiff’s counsel did not have a conversation with the jurors and instead asked questions that did not seem to have a good flow or organization. During his second session of asking questions, he asked the following questions, “What have you heard about trial attorneys?” and “Will you give me a chance to earn your trust?” This exchange was awkward and the jury did not seem to respond to it well. In fact, I think that these question hurt whatever credibility he was trying to establish. Some potential jurors seemed to answer the latter question in the affirmative not because they believed he could gain their trust but just because it seemed like the right response. Granted, the attorney did seem quite nervous, but it seemed that if he had spent more time thinking through his questions that it would have gone over better.

“(Defense counsel) did a great job during jury selection! She had a conversation with the jurors and had a clear and coherent flow to her line of questioning. She had a great presence, never coming across as threatening or insincere. She was confident, smiled, and had good follow-up questions. Additionally, and what I thought was fantastic, is that she stood by the court reporter rather than stay at her desk or go up to the jurors. This encouraged the jurors to speak loudly enough for the court reporter to hear. The attorney seemed to have thought through the types of people whom she wanted on her jury, and I thought she did a good job of staying focused on that. The jury responded well to her in part because of her confidence and presence, but also because she never confused the jury and spoke to them clearly and with a line of questioning that seemed natural. She did a great job; it was truly a great experience to watch.

“While I did not get to observe many components of trial, it was a great day and I learned a lot from the experience. Overall, my takeaway was that preparation and confidence really show.”