HOW TO CRAFT AND DELIVER AN EFFECTIVE OPENING STATEMENT 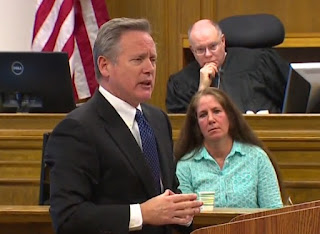 You can watch prosecutor Scott O’Toole deliver opening statement to a jury in a multiple-victim murder case. The defendant is Michele Anderson who is charged with killing six family members on Christmas Eve 2007 in Carnation, Washington. Prosecutor O’Toole’s opening is a fine example of how to craft an opening statement that will leave a lasting impression on the jury. And, the speech techniques that he uses to communicate to the jury are extremely effective.

The following are some things to watch for as you view the video of O’Toole’s opening. First, he opens by taking the jury to the crime scene. Obviously, he has walked the scene – a scene visit is critical to your presentation to the jury – because he takes the jury there with their  minds’ eyes. He paints a picture of what it looked like walking to the house and shed where the bodies were found. By beginning with a description of the bucolic scene he seizes the jurors’ attention with a stark contrast - the scene where the bodies were found. Other contrasts that he alludes to include it being Christmas Eve in a decorated home with family gathered to celebrate. “Nobody lives in that house anymore,” he says.

Second, the prosecutor’s theme is simple but powerful. He tells the jury that the case is about six human beings. This conveys the moral imperative that the jury will be compelled to return a guilty verdict should they find that Anderson took the lives from the six human beings who represented three generations of the family. Giving the opening statement symmetry, he finishes with the names of the six human beings. To bring these human beings into the courtroom, O’Toole doesn’t go high tech. Rather, he holds up an enlarged picture of each family member and tells the jury a little bit about the person.

Third, O’Toole told the story from different points of view, bringing the story alive in the courtroom. He begins by verbally taking the jurors to the scene and showing it to them. He stepped away from the scene and told the jurors about whom the victims were and then outlined what the evidence would be. Next, the prosecutor shifted the storytelling to a police perspective and the story becomes a police procedural with the evidence being uncovered by law enforcement, including the defendant’s prevarications and confessions. Then, O’Toole shifts back to telling the narrative story of the killings putting the jurors there. He shifts at times from the past  to the present tense – “the bullet lodges” ,“Olivia is next” - enabling the jurors to follow along step by step as Anderson kills the family members.

Fourth, O’Toole dwells on Anderson’s motive. Relying on the Rule of Three speech technique, he said, “Money. Money. Money.” He explained how often Anderson spoke about money and how angry she was. This gives the jury an understanding of why Anderson did what she did, a question they are undoubtedly asking themselves.

Fifth, the prosecutor finished strong by describing the evidence showing how Nathan Anderson died. In conclusion, O’Toole said, “Call it what you will ‘mass murder, obliteration of a family.’ That’s not necessary. In closing argument, I will stand before you again and ask you to simply call it what it is – six counts of aggravated murder in the first degree for the murder of Wayne Anderson, Judy Anderson, Scott Anderson, Erica Anderson, Olivia Anderson and Nathan Anderson. Thank you.”