A TRIAL TO FOLLOW IN 2012 - ROGER CLEMENS AND RUSTY HARDIN 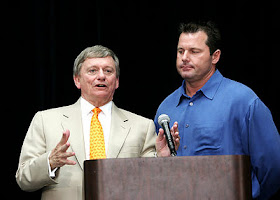 Advocacy at Its Best – Rusty Hardin at Work

The trial had just started. July 14, 2011 was the second day of testimony when the prosecutors made a mistake that the judge said a first year law student would not have made. This occurred in the trial of Roger Clemons, who is charged with perjury, obstruction of justice and making false statements. This is another high profile case alleging that a Major League Baseball player was involved with steroids and other enhancement drugs. The boneheaded mistake - prosecutors Steven Durham and Daniel Butler played a video that showed a Congressman discussing Laura Pettitte's sworn statement, which United States District Judge Reggie Walton had previously ruled inadmissible. Pettitte’s statement was that her husband had told her that Clemens admitted using human growth hormones, and the judge held it was inadmissible double hearsay.

Judge Walton scheduled the trial for April 17, 2012. It will be worth following because of its social importance but also because of the quality of the advocacy. Defense counsel Rusty Hardin is one of the best of the best. Hardin is now known for successfully representing high profile clients including: Arthur Anderson (Supreme Court overturned Enron case conviction); the estate of Texas millionaire J. Howard Marshall (Anna Nicole Smith got nothing); Victoria Osteen, wife of evangelist Joel Osteen (civil suit filed by airline attendant) and sports figures (Warren Moon, Wade Boggs, Scottie Pippen and so on).

I first got to know Rusty as a prosecutor in Texas. He has it when it comes to being able to communicate with judges and juries. He exudes sincerity and trustworthiness. He was once aptly described in Texan as follows: “Rusty is as slippery as deer guts on a door knob.”

Looking forward to the Clemen’s trial and watching a master at work.